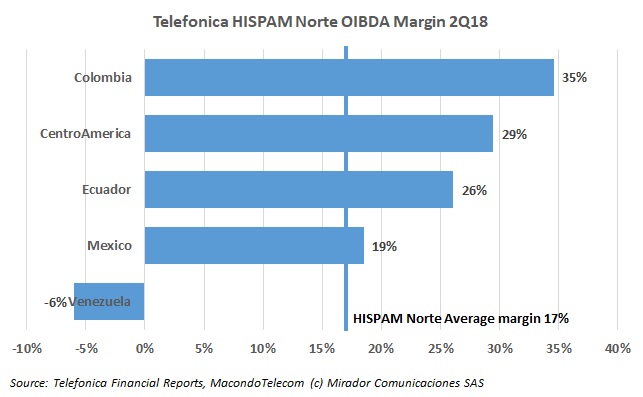 If this is goodbye

The once-every-few-years rumor of Telefonica selling certain Latin American properties to pay down debt has resurfaced again.  My main comment is “Why is this news?”

I think I first saw a GSMA article which says that the company is trying to sell Mexico (valued between US$1.1B and US$1.9B – quite a range) and the remaining 60% of its Central American properties (valued in US$760M). The other 40% had been sold in 2013 in another debt paydown exercise. Telefonica still has 100% of its Costa Rica subsidiary and since all this is rumor, we have no idea whether Costa Rica is on the auction block or just 60% of it.

My guess is that if someone was prepared to take everything, TEF would be happy to gift wrap for them, maybe throw in a free set of steak knives.

It was only in late June that the rumor was that Telefonica was selling its fixed line assets in Spain. That was also said to pay down debt. Are both rumors true? Was the previous rumor just a misinterpretation of this rumor “Telefonica is selling something big!”? Or is this the smoke screen because the first one was so dramatic that it caused consternation and so better to divert attention? Are neither correct?

There is no question that Telefonica has a lot of debt (€43.6B of it – net of cash – at the end of 2Q18). The company has also made no secret of the desire to reduce it and the easiest way to do that is to sell things – big things. The challenge is what is non-strategic and what are people willing to buy.

Up until now the objective has been to sell O2 in the highly-competitive and hard-to-make-money UK market. This has not gone well. Here is a list of headlines.

Brexit uncertainty – which only seems to increase over time instead of coming clearer – is not helping an already challenging situation.

Telefonica has not been happy with Mexico for many years, unable to ‘crack-the-code’ of beating America Móvil on its home turf. Telefonica officially has its reasons. The broader industry discusses it over coffee or cocktails and comes up with different reasons. Reality is likely some combination of both but the fact is that Mexico is a deep disappointment. The graph above shows Telefonica’s ‘equivalent’ to EBITDA margin (Operating Income Before Depreciation and Amortization – OIBDA) for the countries it reports separately in its northern Latin America division, HISPAM Norte. Apart from Venezuela – which is a basket case for other reasons – Mexico is the poorest performer of the lot.

(If someone wanted to buy Venezuela, they would no doubt get two sets of steak knives, some Corning Ware and a kiss on both cheeks from the entire Telefonica board.)

However, I assume that the combined ‘daily special’ makes more sense to potential buyers than ‘picking from the menu’. Except for Mexico obviously, these are, individually, very small markets and Telefonica may have built common infrastructure to lower costs. Buying one piece or excluding a piece might require additional investment or the negotiation of complex service agreements and almost certainly (assuming there is common infrastructure) more cost.

Breakin’ up is so very hard to do

That leads me to the question of “Who?”.

I am not going to spend any time on Vodafone speculation (see my recent blog) although I suppose there would be an argument that if ‘Red’ was ever going to do something in the region, buying this package would give it scale as well as entry into the second biggest market.

Latin American specialists like América Móvil and TIGO could run into competition concerns although TIGO would have very much fewer problems. The challenge would be TIGO’s owner, Millicom, has a reputation for being ‘thrifty’ and the GSMA article says TEF is “keen not to undersell”. If there was even a basis for AMX and TEF to negotiate, it would seem to be impossible for regulators to approve a combination of the two, especially in Mexico.

Mathematically AT&T could buy TEF (considering AMX’s enormous market share) but, assuming it wanted to – a big IF – that would mean reducing the Mexican market from three players to two. Not usually a popular concept with competition authorities.

Verizon could be an interesting candidate: bug AT&T, revitalized trade agreement with Mexico, same community-of-interest that attracted AT&T etc. But the company is very focused on its 5G deployment and there may be neither money nor management bandwidth for a Latin adventure.

As to other operators already in Latin America… Entel leaping from Peru to Mexico and Central America? Telecom Argentina is just getting itself going a quad-play operator. It has other priorities. Oi is just coming out of ‘Chapter 11’ and TIM has shareholder problems at home.

Then we go into fantasies like China Mobile which has expressed interest in the region but has yet to do anything concrete. And what would the White House say? This could be an interesting test of president-elect Andrés Manuel López Obrador (better known as AMLO) independence. AT&T and the White House seem to hate each other (because of the Time Warner donnybrook) so coordinating policy on this may be a challenge.

Among others, China Unicom and China Telecom are going through their own merger. This chunk that Telefonica (allegedly) has on offer may be too big a mouthful for the Vietnamese (who are in Peru and nowhere else).

What is left as candidates are purely or nearly pure financial investors, the same type that bought 40% of most of TEF’s Central American properties a few years ago.

As a strategy, this has not gone badly over the past decade. Entel’s ownership change could be viewed as a financial investor play, Telecom Argentina likewise, and we will see how Oi turns out when it comes out of bankruptcy.

The last question is what happens to the brand. Again, this story is entirely rumor so I have no idea what the company’s real plans are. Maybe they will offer a licensing agreement, maybe include a marketing agreement like Vodafone and Telecom Argentina.

If not, it would be sad to see the Movistar brand disappear from so many countries.

My darling, if you say goodbye / I just know I’m gonna cry.

(Title reference: Burt Bacharach / Hal David the masters of pop in the 1960s. This comes from Make it easy on yourself, most famously recorded by The Walker Brothers in 1965.)