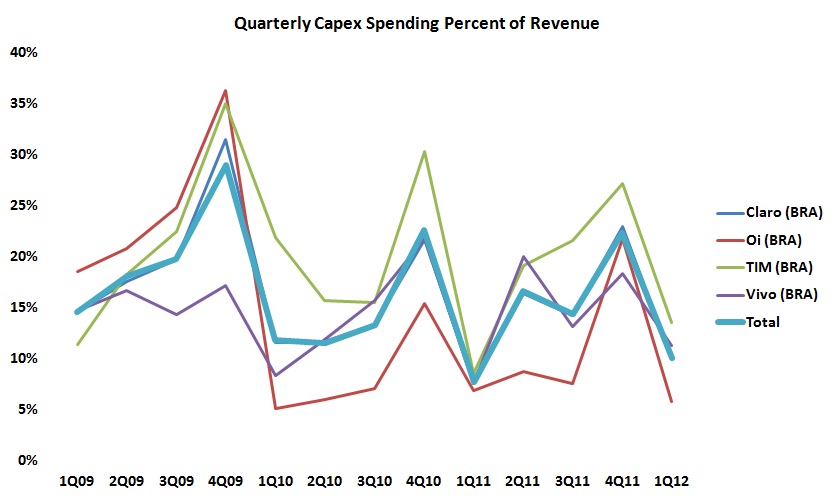 Could there be any doubt about this week’s choice?

Full Disclosure #1: I left Comcel as President in December of 2001 having spent 13 months working for America Movil. Since I left, I have on occasion provided advice to the group mostly in regulatory issues. I have advised principal competitor Telefonica through my association with Yankee Group.

Full Disclosure #2: I wrote a lot about this during the week and I have cribbed some of my other texts to create this one.

From a public point of view, this wasn’t even on the radar screen two weeks ago. Last Thursday July 12, the Minister threatens TIM with this kind of sanction because of quality issues, but only mentions TIM. Tuesday July 17,  the city of Puerto Alegre’s consumer advocate stops sales of all operators pending better quality of service. The next day the national telecom regulator Anatel calls a hurried conference call to sanction all but Telefonica’s Vivo. TIM remains the target blocked from selling in 19 of 27 administered areas (26 states plus the federal district of Brazilia). Partially state-owned Oi comes a distant second with 5 states affected and America Movil’s Claro is blocked in three states.

Quick math shows that 19+5+3=27 showing that exactly one company was picked to be sanctioned in each of the administrative areas. Now either by sheer luck there was exactly one operator below standard in each area or – as one press report had it – the lowest operator in each area was selected regardless of whether or not they met the regulator’s quality standard. More likely the latter since some politician or politically-minded bureaucrat would 1) want every state to feel the federal government was looking out for them 2) it is a simple rule that would be easy to explain.

The problem is that it makes no sense and to my mind it should be illegal.

It’s hard not to think of this as some sort of political one-upsmanship given the timing of the annoucements and especially the last-minute nature of Anatel’s action. It looks like  the Minister got wind of Porto Alegre’s decision and wanted to get out in front. Or he was floating a trial balloon and Porto Alegre jumped on it. They at least banned everyone until the industry got its act together. In either case, the minister was embarrassed by Porto Alegre’s action and ordered Anatel to get an even more draconian action in place and in front of the national press within 24 hours.

I’m unfortunately not sufficiently familiar with the Brazilian political situation to know what really motivated the minister. In the byzantine world of factions and parties within the government’s coalition anything is possible. Dilma has dismissed a number of ministers for corruption, incompetence or both. A crowd-pleasing stand in front of the press is a good way to ensure continued employment at least until the story dies down.

But real customers and especially shareholders are the collateral damage. Friday July 13, TIM’s stock dropped 7% just on the hint that something like this might be in the works. Its stock dropped again after Anatel’s announcement as did Oi’s. Even Vivo’s stock was affected. America Movil doesn’t trade in Brazil.

As to whether consumers will actually benefit, that is by no means clear. If anything TIM BR spent a higher percentage of its revenue on CAPEX than its peers. See the chart at the start of the article. It has also has the highest spending in absolute terms over the past four quarters to 1Q12. If despite this spending it is at the bottom of the quality list then either TIM’s problems come from many years prior or it wasn’t spending on items directly related to quality. Among other possibilities, no doubt TIM was overspending in high-economic-impact states like Sao Paulo and under-spending in low-impact– but politically sensitive – states like Amazonas and that’s where they got into trouble.

Government-controlled Oi is the most miserly operator and Claro the second. Both got the lightest slap on the wrist. Claro was uncharacteristically contrite and said they wouldn’t contest the result.

Only Vivo/Telefonica seems to show a relationship between CAPEX spending and this measure of quality: they were just behind TIM in spending and got off without penalty (except in Porto Alegre).

On the one hand 30 days is a dreadfully long time for a “stop sale”. On the other, it is impossible to fix network quality issues that quickly. If the government sticks to its guns, it will be months before operators can start selling again.

The operators say that the issue is tower permits with local governments reluctant to authorize more base stations. Puerto Alegre — which fired the first real shot — doesn’t permit towers to be within 500m of each other. If the solution is more towers then we will have irresistible force meeting immovable object.

This is yet another case of regulators trying to deny the laws of physics — and another full-employment act for lawyers.

As to what this means for Anatel, I doubt they come off looking well. This has all the ear-marks of a grandstanding move by the Brazilian telecom minister for some internal Brazilian or personal political reason. Anatel’s hurried press conference on Wednesday after Porto Alegre’s announcement of a similar move on Tuesday shows desperation not deliberation.

Worse, Brazil once again looks like a country which makes up the rules as it goes along to suit short-term political considerations with little or no consideration of the big picture. The operators who are already there are trapped. Soros must be rueing that he bid for a 4G license. Other operators will give the country a wide-berth despite its obvious potential.

I sure hope the minister gets what he wanted. No one else is likely to benefit.

Bottom Line: I believe this was a politically motivated mess that will do significant harm to Brazilian telecom. It is particularly damaging if the affected companies were above Anatel’s stated quality standards: that’s what they what they should use as a guide for investment. That being said, there was obviously a level of customer complaints about which the operators were not demonstrating sufficient public concern, giving the minister and Porto Alegre the pretext for their arbitrary actions. Finally, operators have to give a higher priority to tower sharing and even network sharing. Engineering-driven companies believe that tower placement is their value add because that’s all they understand. It is becoming their Achilles heel.