The futility of ex-post market-share control

A few weeks ago, I attended the Colombian Engineers’ Association (ACIEM) annual telecom conference. I am on the program committee so somewhat honor-bound to be there, but I would go anyway because it is one of the best small conferences of the year. Every time there is a C-level panel from the major operators and the Minister or Vice-Minister has to sit and listen to their comments, usually their complaints.

This year, with a new Minister, the program committee had hoped that the discussion would be around the new government’s desire to “connect all Colombians well” (i.e. with quality broadband). Largely this is what happened (former MinTIC Daniel Medina who heads the committee moderated the panel) but unfortunately there were not many good suggestions. As I wrote a few months ago when Minister Constaín announced her plans, this is not going to be easy. Especially since she seems to have little money to do it herself and her Vice-Minister (who comes from the Finance Ministry) keeps repeating that he is prepared to offer incentives but not subsidies.

However, not everyone played by the rules or played nice all the time. Just about everyone got their favorite ‘digs’ in.

The head of the 4th place operator, Avantel, Ignacio Román, said his investors were prepared to put more money in the country but they were discouraged by the market share distribution in Colombia. Although he did not ‘name names’, he was obviously referring to Claro, America Móvil’s subsidiary which is accused of having a ‘dominant’ market share.  That is only about 50% but obviously competitors would like it to be lower and theirs higher.

That got me thinking about the problem of attempting to manage market share, especially once things have gotten to the point where one player has most of the market.

(I think Avantel ‘doth protest too much’. It has been in the market for over 20 years – it launched service the same day I arrived in Colombia – and has never managed more than a single-digit share. While its current shareholders may not be responsible for that, I do not think blaming your competitors or blaming the government is appropriate either. Still, it does not hurt to try – especially when the regulation that forces Claro to provide you with national roaming is coming to an end – which is what Román was doing here.)

My view is that – setting aside questions about whether 50% is too much share or if governments should indeed intervene in the markets to control market share – the time to take action was long ago, not when ‘the horse was already out of the barn’.

Instead the Colombian government ‘woke up’ to having a ‘problem’ roughly 10 years ago when Claro had about two-thirds of the market. By that time , it had used its higher cash flow to achieve better coverage than its competitors and while it was by no means Colombia’s most popular player in surveys, its ubiquity gave it dominant mindshare. (Yes, at one time I was the CEO of Claro Colombia. But when I left, our share was only 55% in a two-player market. I am not justifying my past actions or behavior.)

It also benefitted from so called on-net pricing whereby operators charged less for calls on their own network. Once it had got to above 50% share many clients found it too costly to switch: most of the people you wanted to talk to were on Claro so it was cheaper for you to be on Claro too.

Which of course caused its market share to go even higher.

That got the regulator tinkering with on-net / off-net tariffs and, eventually, asymmetric termination fees.

Zero-rated or asymmetric call termination is often used as a transition mechanism to help a new player get established and not be crushed by high cash outflows while its subscriber base is small and so the majority of calls go to competitors. The challenge is deciding when this practice should stop: when is a new player sufficiently large that it no longer needs this help. While it helps the new player’s cost structure that neither guarantees the new player’s success nor that this success will come at the expense of the leading player.

New players, MVNOs, even attempting to use spectrum auctions to handicap Claro have, in some sense, done a great deal: its market share has fallen 17 points to below 50%. I think Claro has also just let some share go, realizing that the regulatory hassles of being over 60% are not justified. (If they did this right, they let go of low ARPU users, maybe tightened active user definitions, letting their competitors pick up the less valuable clients. If this were a card game, we might call it ‘pass the trash’.)

In other Latin American countries, legislators have flirted with mandating maximum market shares (once achieved a player would have to stop selling until its share went down below the threshold) which I doubt any player would like to see happening. At one point Colombian legislators had introduced such a bill but, fortunately for common senses and free markets, it went nowhere.

But my assertion is that that waiting to take action when a competitor already nearly 70% share is too late. I question if it is even possible to take any action to prevent a market from reaching its natural point-of-equilibrium. Only now are people asking if Google’s share in search is too high or Amazon’s in e-commerce. Like mobile communications, these have so-called ‘network effects’ that encourage ‘winner-takes-all’ outcomes.

Once a company has got to over 50% share, it has already built out more coverage than anyone else in the market, it has already achieved more mindshare than anyone else in the market. Unless it decided itself to do something completely stupid – like let its customer service degrade or charge well above its competitors – it will be very hard to get its share down to where its competitors think it should be.

Finally, as to the fundamental question about whether Colombia is too concentrated, if government needs to take action (of if they are just being populists) by my calculation the Herfindahl–Hirschman Index or HHI for Colombia was 0.31 in 4Q17 (the last quarter for which MinTIC makes it easy to find market shares). See the graph below. 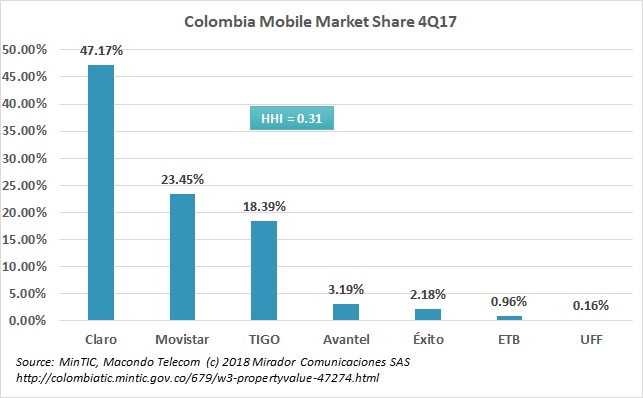 Usually, the wisdom is that an HHI above 0.25 should be ‘investigated’. That is, it is not necessarily dangerously overly-concentrated but authorities should ask themselves the question, and they should look at other measures of concentration. Avantel’s Román alleged that Colombia’s EBITDA margin is above that of the rest of Latin America, something I have not checked out. That would be a more important indicator of market concentration than simply the share of the largest player or the HHI. (The HHI is difficult to interpret when the number of players is small, as it is here. Because its minimum value – if everyone had the same share – is 1/N where N is the number of players, it is correlated with N. An HHI of 0.25 is too high when 1/N is insignificant but 0.31 may be relatively normal when 1/N is 1/7 or 0.14.)

Considering that markets often organize themselves somewhat like a Pareto curve, the graph does not look wildly unexpected. The top 2 players (29% of the players) have just over 70% of the market.

This may not be the distribution you want but it is not so far off normal to justify the kinds of drastic actions that would be required to get it to look substantially different.

Colombia should have thought about ‘closing the barn door’ much earlier.