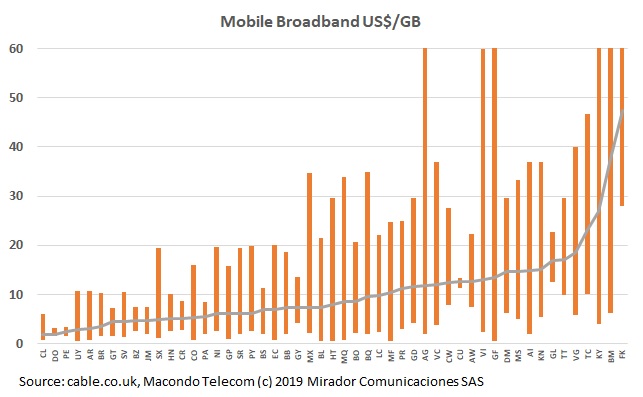 For what it’s worth

I saw an interesting article this week by a UK-based website, cable.co.uk, looking at the price per 1 GB of mobile broadband in 230 countries. That got me wondering about how the Latin American countries fared.

The graph shows the average price by country for the Americas (as the authors define it) excluding Canada and the US. It includes Greenland (who knew?) and the Falkland Islands (sheep use mobile broadband?) aka Las Malvinas. The orange bar shows the range, which is, for most countries, quite broad. The minimum is presumably from a postpaid plan with a large bucket and the maximum is the simplest prepaid plan.

It is hard to read the horizontal scale but Chile has the cheapest broadband in the region. The Dominican Republic, Peru, Uruguay and Argentina round out the top five (or should it be bottom?), with Brazil in sixth.

Among the major economies the most expensive broadband is in Mexico. After that (more expensive), the list is filled with small Caribbean markets with the Falklands / Malvinas in last place. Presumably connecting to the rest of the world is the problem for the latter or maybe sheep are heavy video users.

The next chart shows same data but sorted by the cheapest alternative rather than by the average rate.

There is considerable variation in this graph. The most expensive of the major economies, Mexico has an average per GB tariff of nearly 4 times the cheapest, Chile. And Chile is only number 34 in the global ranking.

Conclusion: Mobile Broadband in the Americas is not cheap.

Governments always say that prices should be lower in poorer countries. That would be nice but the two really have nothing to do with one another. I have to admit I got wondering when, in the full list, of the 10 lowest tariffs, all were from Emerging Markets. However, that turned out to be coincidence. The next graph shows all the countries for which I could get complete data. (cable.co.uk looked at a lot of sub-national areas / non-countries from a World Bank point of view – like Greenland or the Isle of Man – and some that the World Bank has no data for political or other reasons – like Cuba,Syria or Iran.) Both axis are on a logarithmic (Base10) scale because of the extreme range of the variables.

It does not take much statistical sophistication to realize that there is no relationship.

So what do I conclude from this?

Not much. Mobile broadband is more expensive in Latin America than it is elsewhere in the world. Maybe if I dug a little more, maybe I’d find something interesting like a relationship to the number of players (more players, more competition, lower prices) or to some physical variable like population or population density (lower density, higher cost, higher prices).

But more likely there are so many variables and special situations that the data will reveal very little.

Stepping back a bit, it is hard to say what the value of this survey is anyway. You are not going to move to India (lowest average rates) just to get cheaper mobile broadband. A company with a mobile-dependent business plan may find this useful but I doubt there are many situations where someone would have to decide between India and Zimbabwe (the most expensive) based on their MBB tariffs.

The extreme variation in rates does show one of the challenges for a multinational company building a business case for IoT: not only will wages vary between countries (labor substitution is often one of the drivers for Digital Transformation projects) but so will MBB rates. In Zimbabwe the labor substitution factor is going to be small but the cost of communication to backhaul the sensors / instruments will be huge.

Maybe someone in the Falklands / Malvinas is thinking about connecting sheep but I imagine that high MBB rates will not be the issue. Coverage is more likely the challenge.

Its greatest use is maybe for regulators, benchmarking mobile broadband rates. The challenge, as above, is that there are too many variables to adjust for.  But bureaucrats will try, so, imitating them, I looked at all countries within +/-5% of Colombia’s GDP PPP per capita. There are seven: Peru, Palau, St. Lucia, Suriname, Macedonia, Algeria and Grenada. Only Peru would be considered to be ‘like’ Colombia in aspects other than PPP-adjusted average income.

Colombia does not come out too badly: its average tariff, minimum tariff and maximum tariff are below the average for the group. That would suggest to me that the bureaucrats should leave Colombian operators alone on mobile broadband rates.

But they probably will not. For one thing, they are regulators and they have to regulate. They have to be dissatisfied or they would have nothing to do. The other reason is that Peru is almost uniformly cheaper. Colombia only beats it on the cheapest rate. Peru has roughly the same wealth but has a much smaller population. It has the same principal operators (Telefonica and Claro / America Móvil). It even has fewer carriers. It should be equally or probably more expensive. But it isn’t.

And some regulator in Colombia will ask that question. For what it’s worth.

Title Reference: A title but no lyrics this week because there is no connection from the one to the other. Stephen Stills wrote a protest song for his seminal folk-rock band Buffalo Springfield but he had no title. According to Stills, when he presented it to the record label, he said “I have this song here, for what it’s worth, if you want it.” The record executive heard, “I have this song here, For What It’s Worth, if you want it,” and the name stuck. It probably should have been called Stop, Hey What’s That Sound which is in the refrain and which often appears in parentheses after For What It’s Worth. The title may have nothing to do with the lyrics or the point of the song, but it works well for this article because the price for a good or service should be set ‘for what it’s worth’. While generally that might mean higher prices in richer countries (because richer consumers are prepared to pay more) and producers should be unwilling to sell anything below its cost, ‘value’ is actually a fairly complex equation and often not very predictable. Think brand premiums on perfume or clothing or why Kylie Jenner is the world’s youngest billionaire. Voice roaming revenues used to be significant in the Caribbean as rich holiday makers called back home. Skype and WhatsApp killed that business so, no doubt, the local operators responded by raising broadband prices. Since roamers often pay little attention to data roaming fees or do not do the calculation when they buy a prepaid SIM with included GBs…

For what it’s worth, anyway.

For What It Is Worth lyrics by Stephen Stills © Warner/Chappell Music, Inc