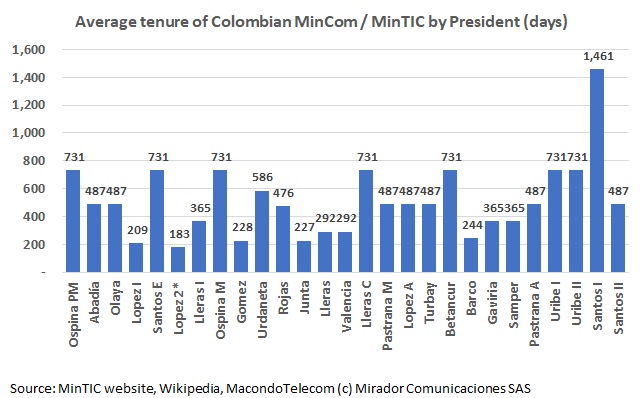 
I have a theory that longevity in senior positions brings better results. Yes, the truly incompetent should be removed as quickly as possible but by the time someone is considered to be a candidate to be CEO or Minister of Communications they should be at least functional at their position. With politicians this is especially […]


The usually well-managed and relatively calm Chilean regulatory scene has exploded over the past few months into open warfare between the operators, the regulator and the courts. The implications for mobile broadband are huge. The opening salvo concerned the 3.5GHz band. On June 20th, 2018, Chilean regulator Subtel suspended the use of this band pending […]


A new Colombian government was sworn-in on Tuesday and that means a new Minister of ICT, known by its Spanish neologism “MinTic”. She is Sylvia Constaín who has worked for Apple and Facebook. Her full bio appears at the bottom, unofficially translated (by me) from the official MinTic press release. President Iván Duque’s inaugural […]


A few weeks ago I wrote about the Colombian government’s sale of its share in Telefonica’s local subsidiary. My conclusion was that this was more than overdue. Now, to no one’s surprise, there is a press report that the government hopes to sell its shares to its partner. This article in Portafolio actually does […]


This thought went through my mind at three separate times in the last week. Once when listening to a new survey on Internet use in Colombia, once when reading a Nokia announcement about a contest to find interesting IoT applications in Brazil and once when reading an email from TMForum. First the Nokia contest because […]